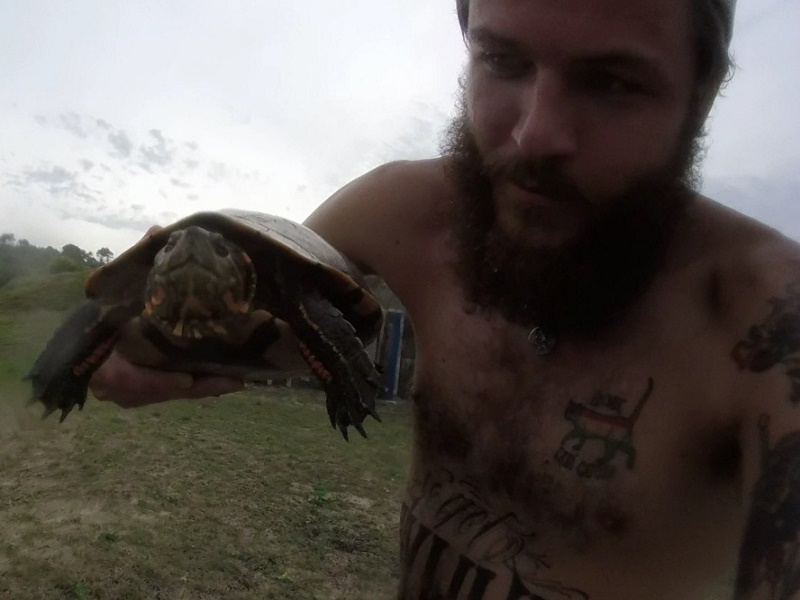 I started my journey into speaking Spanish with DuoLingo, and was confused at how much time the app dedicated to teaching users the word “tortugas”- specifically “La tortugas beben leche” (The turtles drank milk). The randomness has worked because the phrase is fully committed to my memory: I just had no idea as to how often I’d use it in Uruguay.

Upon arriving in the capital of Country #43, I was met by my couchsurfing host, Kathy, who is a Spanish teacher. I met her family who couldn’t speak English so forced me to practice the Uruguayan pronunciation of Spanish (‘ll’ and ‘y’ is pronounced ‘sh’ here) before we went for dinner on the promenade with Cassie, who I met in San Pedro a few weeks ago. We grabbed empanadas and some beers, and returned the next day as well for bizcotchas and maté.

Ooof, those knashers. Regarded as some sort of demigod over in this part of the world. . . . . #luissuarez #suarez #jaws #fcb #uruguay #montevideo #graffiti #streetart #travelling #exploring #couchsurfer

From Montevideo, I headed several hundred kilometres north to a small town on the coast called La Corranilla. Arriving in the middle of the night, barely sleeping on the bus and finding no one up at my supposed accommodation; I set up a base on a grassy patch behind a fence and grabbed forty winks underneath the Milky Way, until sunrise when Karumbé opened its doors and someone came to inspect the pile of bags and pair of legs sticking out from the grass.

There are probably easier ways to make a good first impression to the organization that you are volunteering with for a week, but I make a habit of doing things the hard way, and explained to Alejandro, founder of Karumbé, that the cheapest bus arrived at 2am and I carry a sleeping bag exactly for times like this. “Anyway, I’m here,” I finished off with. Thus my time volunteering in a turtle rescue and rehabilitation-conservation project started.

Day #1 – The initial induction was spent learning how to safely handle a turtle, the differences between species and the range of injuries/health problems they encounter in Uruguay (mainly plastic and fishing line related). After lifting them out of their rehabilitation pools, I cleaned the tanks and the more experienced volunteers did the injections and glucose drips for the unhealthy ones. I polished a healthy turtles shell while observing to smarten him up a bit and cooked lunch for everyone. By the next time I’m on rehabilitation duty I’ll be able to be more hands on.

Day #2 – Probably the nicest weather of the entire time I’ve been travelling, an acceptable 25°C with a nice sea breeze, so I was happy to be assigned to a 25km walk south from the Brazilian border back to base. We were logging all the stranded marine mammals that we found washed up on the beaches and would bury any dead turtles to ensure their shells didn’t wind up on the black market. Luckily we didn’t find any turtles, but did find a dead dolphin and 23 sealions ranging from month old infants to 2.5 metre long giants. After 8 hours in the sun, I returned back to a barbecue at Karambe the colour of a native Uruguayan.

Day #3 – A thundery morning cancelled all of our normal duties, so I deepcleaned the kitchen and bathrooms to stay dry. A local man visited the centre after lunch and explained that he caught a terrapin in his garden and it has a damaged shell; Lucas and I were told to walk along the beach to collect it and bring it to the centre. He was an energetic rascal and spent the entire 3km walk back scratching me whilst trying to make a break for it. I finished off the day giving families tours around the sanctuary, only breaking out of Spanish to ask another volunteer for an unknown word, and went to bed exceedingly proud of how much my newfound ‘second language’ has improved.

Day #4 – Another rainy day so I broke up the monotony of rice and pasta by making a ‘5 Horseshoes’ chocolate tart; the girls preparing dinner also mixed things up with some delicious homemade empanadas. Whilst the tart cooled, we released a tagged, green turtle back into the sea after it had recovered from ingesting plastic that was floating in the algae-filled water that the species feed in. A huge amount of people came to wave it off, and one of the longstanding volunteers taught them all – and me – the ‘Karumbe liberacion dance’. I doubt I was the only one with goosebumps as we watched the turtle paddle out to freedom.

Day #5 – When will this rain stop? We headed out to Cerre Verde today to record the amount of turtles we could see feeding in the bay from our vantage point on the cliffs, and were caught out by another intense rainstorm. We stayed put for two hours, spotting 30 or so bobbing turtle heads (I’m aware of the joke, much to my enjoyment trying to explain it to the Spanish-speaking volunteers!) coming up to breathe, before heading back to base to dry off. We also found a penguin on the beach who had got lost/ill on his migration route, washed up to shore and is refusing to eat. Back at base, he was tube-fed and will remain here until everyone knows what to do with him. 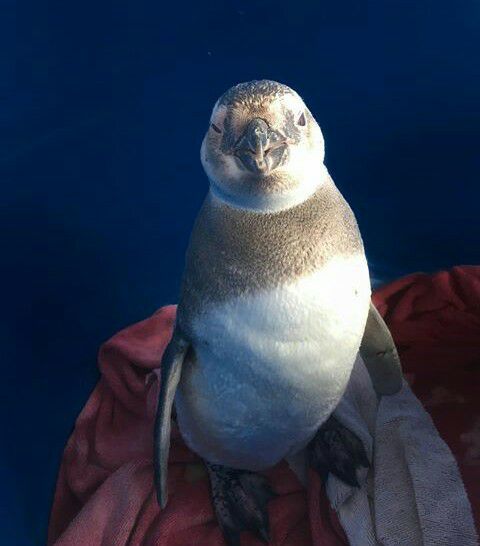 Day #6 – Unfortunately we came across a dead juvenile green turtle yesterday, so today we carried out an autopsy to find out why it had died so young. Usually, plastic is found inside their digestive system which stops them from eating; so this is what we expected to find after removing the tough skin on the undercarriage and peeling off it’s pectoral muscles. However the intestines were just full of algae, and everything else seemed to be in order. Once the liver, kidney, heart and stomach were removed, all that was left was a thin layer of tissue (I was informed these were the lungs, just without air). One of the volunteers who is training to be a vet cut open the lungs and found evidence of an infection; so it was presumed that this is what killed the turtle.

My GoPro started playing up and refusing to accept battery so cut out after we measured and cut the underside of the turtle open; but the rest would have made for pretty gruesome viewing.

Day #7 – Not many jobs needed doing today so Lucas and I played ‘handymen’: painting the lodges, touching up the bridge that joins Karumbe to the road and moving dirt into the puddles that the rain has left after yesterday’s storms.

Day #8 – The minimum number of days that you can volunteer for to get accepted is 8: so this was my last day… and what a day to finish on. We split into two groups and walked back to Cerre Verde (the same place that we were for Day #5) and put up a gazebo to keep any ‘catches’ safe from the sun. We changed into wetsuits and slowly walked into the sea in formation, holding a 100m net between us. At shoulder height, being battered by the waves, green turtles would swim into our net – we would remove them and take them back to base to monitor them for ingested plastic. My group captured one huge green turtle (and a stingray accidentally, released without harm!); the afternoon group caught three.

Captured this #turtle on my last day in #Karumbé, she was named 'Gringa' after me as the token gringo out of 15 volunteers. The language barrier was tough but I got there in the end, will miss these guys as I head up to #44 #Brazil #Brasil. . . . #turtles #tortugas #animals #conservation #wwf #uruguay #travelling #volunteerwhiletravelling #backpacking #exploring #travels #gotbusyliving

To make space for the ‘new recruits’, we released a healthy turtle that was clear from plastic back into the sea. It was a smaller affair than last time due to the short notice, and the turtle was more reluctant compared to Day #4’s; my job was tagging it’s flippers to make it easily identifiable next time it comes into a human contact. I finished off my time at Karumbe with a plateful of stuffed aubergines and a few hours sleep before leaving as I arrived, under the cover of darkness.

La Corranilla is only 20km away from the border, so it was easy for me to find my way to ‘check out’ of Uruguay and ‘check in’ to Brazil.

I feel it is worth mentioning the overwhelming kindness of Uruguayans, as it is a fairly little known country. Maybe it’s the culture of passing a ‘mate’ around a group of friends, ensuring everyone gets their fill and isn’t left out. Maybe the ideology of the socialist government (ensuring free healthcare, education and drinking water for all) that replaced the dictatorship has filtered down to all levels. But in every group, household or community I was made to feel welcome; every time I was a newcomer everyone made an effort to introduce themselves to me straight away; and the entire country has a ‘What is mine is yours’ attitude to food, drink, mate, friends, small change… everything. They aren’t told to, that would be communism; they’re not even really expected to; they just want to and it totally works, as long as everyone shares things back in return (chocolate and apple tarts in my case!). Uruguay may have topped Peru on my leaderboard of ‘Favourite people’.

If you enjoyed reading this travelogue, please share it around on Facebook/Twitter; read through the other posts from this incredible journey so far; and make sure to subscribe via email at the bottom of the page so you don’t miss out on the next installments. Thank you!