We spent 6 days in Arizona, interrupted with a 48 hour detour to Utah, with the Grand Canyon highest up on our to-see/do list. As it was closest to the Nevadan border, having crossed from the Hoover Dam, we stocked up on hiking supplies in Williams and parked up for the night in a Pizza Hut car lot.

All hiking recommendations advised against attempting to get from the South Rim of the Canyon to the Colorado river and back up again in a day (a warning reinforced by a park ranger and multiple signs informing us of our pending heatstroke/cardiac arrest/death!), but we thought as long as we set off by 8am we had set ourselves in good stead. We woke up before our (already early) alarms due to the altitude; we hadn’t realised how cold it would get parking up at 6,000 metres and were wide awake, albeit shivering, at 6am. We paid the $30 park fee and parked up as close to the South Kaibab Trailhead as possible before beginning the hike.

On all the hikes beforehand, we had walked uphill before turning around and letting gravity take over to get us back to the van; but the Canyon differed in that we stomped down a knee-jarring trail to reach our destination before turning back up. We were determined to beat the midday heat and set a great pace, overtaking groups that had set off many hours ahead of us, until my creaking knees demanded a slower speed. Around every corner or switchback was another breathtaking view, and words nor pictures can do the sheer size of the canyon justice – it just never seems to end.

The Park Warden told us not to attempt to hike Rim-to-River and back in a day with our lack of expertise and equipment but we proved him wrong and it was excellent. Pictures don't do the sheer size and beauty of this place justice. #Arizona

Once we had spotted the Colorado river, we knew the end was in sight and quickened the pace again, before we realised that this was only the halfway point – as the last sign before the trail starts said ‘What goes down, must come back up’. We found a nice beach and found shade under a tree whilst we had lunch and water, although we were rationing out a gallon each. I massaged my knees and we considered swimming in the river to wet our clothes and cool us off before the much harder ascent back up to the rim.We took it much slower on the walk back up, stopping off 5 or 6 times more than we did on the way back to appreciate the views, safe in the knowledge we would definitely make it back to the van before nightfall. The next day, we drove up to Utah for some more hiking, which you can read about here, after which we returned to the Grand Canyon State, bypassing the National Park to stay overnight in Flagstaff. 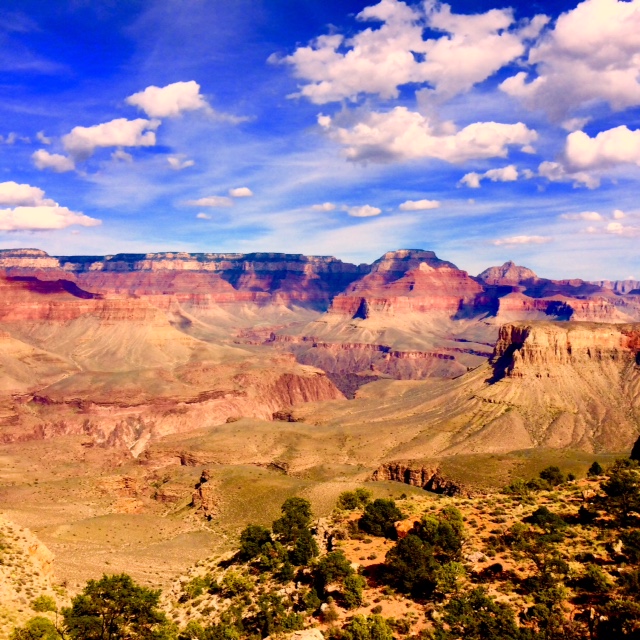 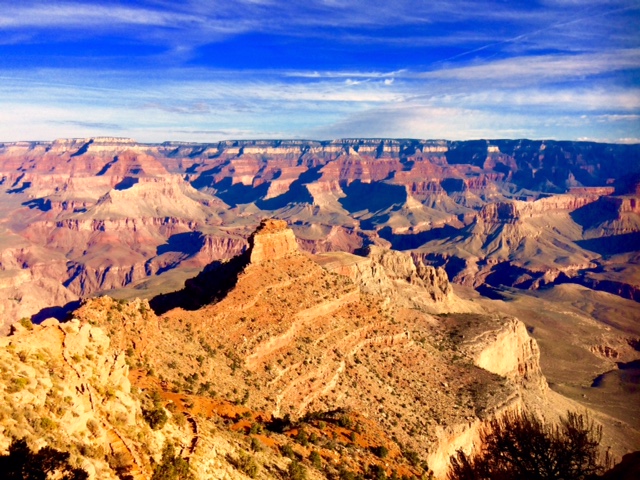 Bare Grills back in action in the middle of the desert. #Arizona

The never-ending drive through the desert threw up many opportunities for scenic barbecues.

Our morning routine of parking close enough to Starbucks to use their wifi without having to buy anything allowed us to buy two tickets to Arizona Wildcats vs USC, a college American Football game. On our way down to Tuscon, we stopped off in Phoenix to break up the drive. Many other blogs seemed dismissive of this desert city recommending against visiting April-October; and with only a day and a half to explore, we could see why. It was insanely hot cruising around in a van without air-conditioning, and having the windows down just meant the hot air came in to hit us in the face. We sought refuge in LA Fitness, buying a 24 hour gym pass and cooling down in the pool. Once the sun had set, we could explore at a moderate temperature; and enjoyed a night out in the Tempe district.

We had watched the away leg of Wildcats vs USC in a bar in San Fran, which is where we realised just how big college football is. Rather than barbecues in the car lot, like in baseball, entire families and friends (groups of up to 50 weren’t uncommon) brought their RV’s and fenced out perimeters around their pitch, before having a full on garden party, with DJ’s, speakers, 70” plasmas and huge gas cookers. The general etiquette seemed to be ‘wait to be invited in’, which went hand in hand with the passive-aggressive marking out of their territory. Very different from our experiences in the Oakland Athletics carpark.

Finally got my head around American Football rules. #LetsGoWildcats #BearDown

Wildcats suffered a shock home defeat, however it was still a good atmosphere in the stadium with all the stereotypical American features: lemonade, kiss cam and hot dogs. During the post-match scenes, we made friends with two college students, Chad and Serro, who we went for a night out with on the outskirts of the campus. American universities have ‘parent weekends’ where parents live on campus and go on nights out with, so the bars were an odd mix of 20-something year olds and people in their 50s. I can’t imagine the scenes if there was something similar in English universities.

We turned down Serro’s offer of staying at his for the week because we didn’t want to get caught up in night out after night out burning a hole in our already thin budget- a good decision as it turned out, with my phone deciding to pack in as we left Tuscan. A quick stop off at Walmart to buy a replacement was our last on Arizonan soil before we drove to New Mexico.