This song (more than any other), I’ve realised probably isn’t suitable for younger ears. I’d recommend muting it for children!

Compared to the scenic drives through Oregon and California, where the road rolled through dunes, forests and at times hugged the coast; the drive up to Las Vegas didn’t quite stack up. It became hard to keep our eyes open as we drove in 38•C heat (close to 100•F for any American readers) without air-con through flat, deserted tundra- often going for 30km without going around a corner. Eventually, the straight roads led us to a “Welcome to Nevada” sign and knew we had reached the Silver State safely.

For what many would consider the highlight of Nevada, Las Vegas is very close to the Californian and Arizonan borders; and we were soon parked up outside Walden Motel, our base for the weekend. A few travellers, also living in vans, had warned us of people’s vans being broken into and locals (understandably) not enjoying having people parked outside their house when they roll back in in the early hours of the morning. Walden was the cheapest available; and you get what you pay for. The contrast in accommodation was clear when we walked past famous hotels such as MGM Grand and the Bellagio.

Free bottles of water and a 50% reliable wifi connection were our main luxuries at Walden: a convenient location certainly wasn’t. It was a 4 mile walk to the Strip, which we filled by drinking a half gallon of vodka (alcohol taxes are almost non-existent it seems!), and we explored the many interlinking casinos, bars and clubs through the night. Our cents and dimes that we had been saving up for the penny slots failed to make us our millions.

The next day, we decided to walk to Downtown LV on Fremont Street until we remembered the horrendously long walk from yesterday. It would have been even worse sober, so we got in the van and drove it instead. Once in Downtown, we paid $15 for a zip line through the covered market (it pays to ask for a ‘cheeky Brit discount’!) before lunch. Disclaimer: Personal cameras aren’t allowed on the line so I’ve had to include their promotional video in my GoPro video. In the international food court I found a burrito bar that served the best burrito I’ve ever had, all for a respectable $9.That evening, we stayed in Downtown- a bar called Park on Fremont- before turning in for the night.

Our final day in Nevada started with a calorific breakfast at the appropriately named Heart Attack Bar and Grill. Despite just turning 11am, we donned our hospital gowns and weighed ourselves on the scales inside the restaurant. Anyone weighing over 350lb (I learnt in Seattle that a male sealion weighs 200lb, just for scale!), eats for free as long as they’re drinking, which is a bizarre promotion for morbid obesity. The owner fully welcomes the unhealthiness behind his creation, accepting and almost bragging that he has “blood on his hands” because of his menu.

Standing 20cm tall, totalling 7,500 calories and weighing in at 3lb… I present my breakfast: The Triple Bypass Burger. #GoneInTwentyMinutes #HeartAttackGrill 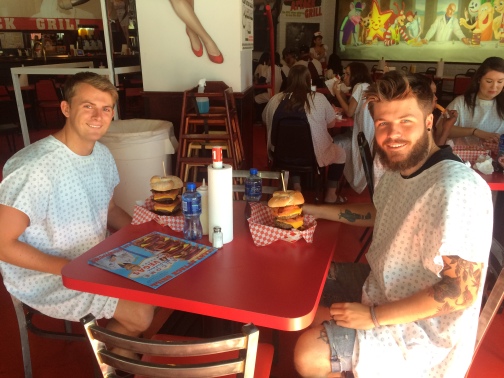 We both ordered the Triple Bypass Burger, a 7500cal monster standing around 20cm tall, consisting of three 1/2lb burgers, with beef tomatoes, onions and lashings of cheese and chilli-con-carne sandwiched in between. I’m not sure how much it weighed but I had put on several pounds when I weighed myself upon leaving the restaurant. Anyone who couldn’t finish what they ordered was subject to a spanking from their server, a punishment I avoided by finishing mine; but a fate that James had to accept after tapping out two-thirds of the way through his greasy monstrosity. We turned down the offer of being carted out on a wheelchair and headed east to the Hoover Dam, where we continued inland to cross the border into Arizona.